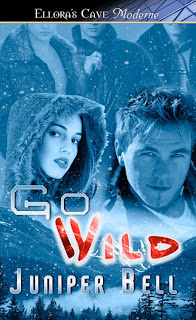 An Excerpt From: GO WILD

Storm-dark eyes demanded her response. In bed, when he got that look, she knew there was nothing for it but to bend over, spread her legs, whatever it was he’d demanded. Ecstasy always followed. Lars knew how to touch her like no one else, knew what she liked, what she needed.

But he didn’t know everything.

“You’re trying to put me in a box,” she said, loud enough to surprise a magpie in the woods. It fluttered to a higher branch.

“How? Why?” He actually looked mystified.

“You’re telling me who to fuck, and how, and when, and why. I don’t want a ‘why’, Lars! I want to fuck who and when I want. For whatever reason.”

“Katia, I know you’re a wild child. I know you like sex in all sorts of different ways. That’s one of the things I love about you.” He dropped his ski poles and pulled her toward him, thrusting his thigh between her legs. An instantaneous, irresistible urge to rub herself against him took over. She pictured his thigh naked, each massive muscle perfectly defined and sleek. On its own, her groin ground into him.

His eyes lit with fierce satisfaction. “See that? You’re just as crazy about me as I am about you.” He planted his hands on her ass, then manipulated her up and down against his leg until she moaned. “You can’t run from what we have.”

She tore herself away, stumbling because of her skis. He grabbed her so she wouldn’t fall. “Stop that.”

He came after her, intent and relentless. The sexy bastard knew what he did to her. Knew how to keep her coming back for more.

“Look, Lars. This isn’t going to work.” She scrambled for the right words. “I can’t marry you. The answer is no.”

His eyes flickered, but other than that he didn’t look one bit daunted. He kept coming at her. “Why? Because of Jimmy?”

“No! Well, sort of.” She shook him off, and this time he let her ski a few yards down the path before he stopped her.

“Sort of? What the fuck does that mean?”

“It means the answer is no. I can’t marry you.” She said the words as firmly and clearly as she could. It hurt like surgery, but it had to be done.

Lars rubbed a ski glove across his forehead, leaving a streak of white. She longed to brush it off, but stopped herself short. She couldn’t do this if she touched him. Touching him made her lose her senses. “Is it Wild? Living in Alaska? The cold?”

“No, none of that,” she said, taken off guard. “I like it here. No one’s telling you what to do or pushing you around. No one’s judging you. You can do what you want.”

The look of relief on his face tore at her heart. “I thought Alaska would drive you away from me.”

She shook her head. “No, it didn’t. It isn’t. It’s not Alaska.” A glance around the still woods gave her a quick vision of snow turning blue in the deepening dusk and velvety darkness settling among the trees. The beauty of it speared her heart. Leaving Lars would mean leaving Wild. She’d have to go back to the world of cities and her aimless existence.

Setting her jaw, she planted her ski poles and shoved off.

Of course, Lars chased her. “Then what? Give me an answer I can understand.” He slid next to her and they skied side by side. He had to keep brushing branches away with his pole.

”Oh, for God’s sake. Why do you have to be so persistent?”

“Because that’s who I am. I’m a competitor and I never give up.”

“This isn’t a race!” But she found herself skiing faster nonetheless.

“No, it’s more important than a damn race. I’ve never felt about anyone the way I feel about you. I thought you loved me.”

“Because marriage is a box.”

“Exactly.” Finally, he got it. Hope fizzed through her. Maybe they could just go back to how things were.

“You don’t mind it when I’m making you come three times in one night.”

“Of course I don’t.” The power of his body gliding next to her gave her the shivers.

“You don’t mind it when I tie you up and fuck you until you scream for mercy.”

“But it’s not just sex. Everything feels right when I’m with you. When we’re together.”

“But we are together. That’s why I came here.”

“So why not get married? That’s what comes next when people feel the way we do.”

Katia’s eyes stung from the wind in her face, or maybe the realization that he didn’t get it, after all. Up ahead she saw their house. Lars’ house. The one she couldn’t stay at anymore. She stopped, panting, and waved a ski pole at him.

“Why can’t you leave things the way they are?”

“The hell with that.” He lifted her up with one hand on the back of her jacket, like a giant cat with its prey. “You want me right now, don’t you?”

“Yes! But you don’t understand.” Those last words came out as a wail as he clicked off the bindings on her skis. They clattered against each other as they fell to the snowy ground.

“Then make me understand.” He let her feet touch the ground again, but kept his grip on her parka. With a flick of his free hand, he unzipped her snowpants. The rush of cold air made her breath catch. He plunged his gloved hand between her legs. Tears sprang to her eyes as the rough friction of the performance leather, custom made for an Olympic champion, brushed against her clit. She went from zero to wildly aroused with one flick of his finger.

“Oh god, Lars. You’re killing me,” she moaned. The underbrush rustled as some tiny alarmed creature scurried to safety.

She writhed against the leather at her crotch, but his hand kept dancing away. The warmth of it radiated through the glove. His refusal to move against her the way she craved drove her right to the edge.

And he knew it, the bastard.

Posted by Juniper Bell at 8:06 PM No comments:

I just got a big surprise from my Ellora's Cave editor (the fabulous Jillian B.) -- my newest book GO WILD is coming out on February 4! Whee!!
Here's the blurb and cover. I'm really excited about this book and am already working on the next one in the series. All the books are set in the fictional town of Wild, Alaska during a very naughty winter festival called Wild Nights. Enjoy! 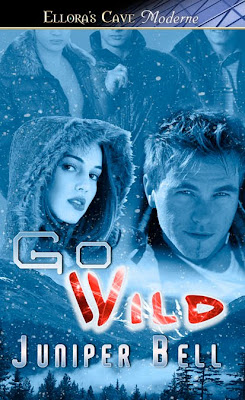 Lars loves Katia. Katia loves Lars. Lars wants to marry Katia. Can he convince his free-spirited lover that marriage will be as fun as her sexually adventurous single days?

Never before has Katia been tempted to give up her carefree ways. She’s deeply in love with Lars, but she doesn’t know if he can handle her wild side—or needs.

But Lars is a hard man to resist. The former Olympic champion won’t give up—not when he knows just how to please her.

The people of Wild, Alaska know the best way to survive winter is to let off a little steam. When Lars’ buddies hit town for Wild Nights, a notorious winter festival with one rule—“anything goes, nothing counts”—he jumps at the chance to prove he’s the perfect man for Katia. 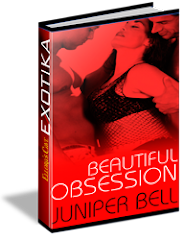 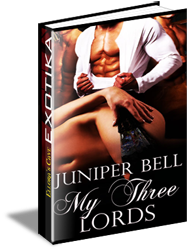 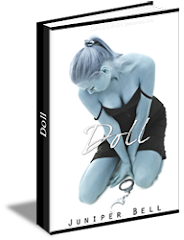